Regardless of geographic location or socio-economic status, we are individually and collectively affected by shifting rhythms of solar and lunar cycles, yet unaware of their shapes. When I began comparing, mapping and transcribing these rhythms into visual/sound projects, I was overwhelmed by the unexpectedly emotional, lyrical motifs derived from what at first seemed like repetitive patterns. The music has been performed and recorded for the project by flutist, Jo Brand, whose interpretation invites a sensory awareness of the rhythmic effects on our movements and breaths.

In 2011, George Zhaozhi Xiong used the September Etude music for his video, "Heaven Earth Circle Square." The moon monotypes were published in 2010 as illustrations for Joan Digby's translations of "Moon Haiku" by Prehensile Pencil Publications.

To hear the music, click on the audio button below the images in each gallery. 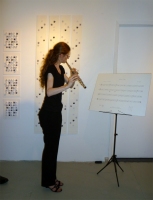 September Etude 2009-2012 for flute and eye
September Etude compares moon phase patterns from 2009-2012 by deconstructing calendars from their natural linear progression into sequences based on days of the week. Four vertical scrolls form a grid on which archival digital moon prints wax, wane and rotate. Applying pitches and note values to each phase using a pentatonic scale found in many cultures, I transcribed music from the resulting visual configurations.

Artist George Xiong used September Etude for his 2011 video, "Heaven Earth Circle Square," which can be seen at www.xhstudio.com 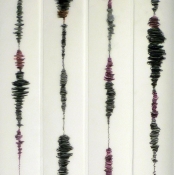 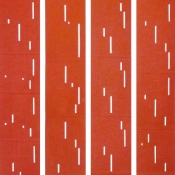 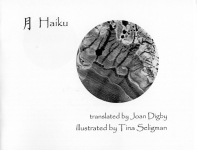